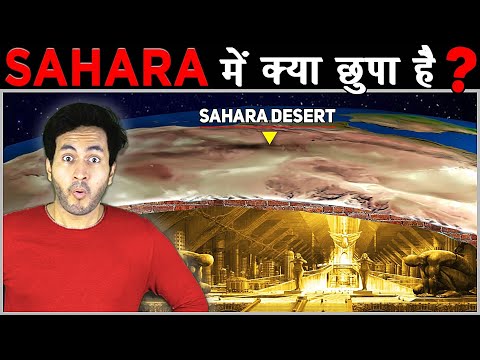 Hello friends, this futuristic city that you see, is actually a ten-thousand-year-old city of Atlantis! Like how were they so advanced with technology and sciences in ancient times? And you know what Atlantis had captured many cities and countries in the European continent. Like this city of Atlantis were literally proceeding towards more technological advancement. It was a rich city, that catered to the needs of its citizens. But then all of a sudden, within a day this city got lost from the world. A geological phenomenon Meltwater Pulse 1B happened, that melted big glaciers and that caused a tremendous rise in the sea levels and lead to a massive tsunami, that swallowed the whole city within minutes! Not only this but many small islands too drowned and the evidence of this can be found in the Caribbean, Mississippi river! But friends, what’s more, shocking is that this lost city of Atlantis has been found again? That too in the Sahara desert!! It was hiding there all this time! To know more about what the archaeologists think, stay tuned throughout the video. Let’s discover this hidden anomaly!