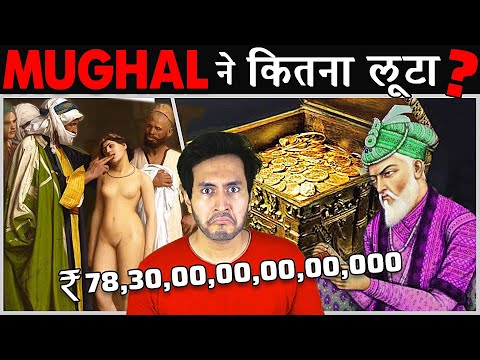 Hello friends, did you know? All Mughal emperors used to charge hefty taxes called "Tirath" to all Hindus? In fact, as per factual pieces of evidence, it’s been said that Mughals earned 90% of their revenue in the form of tax collections from Hindus. And look at the height, no tax was levied on any Muslims, in fact, they were given free jewels and money for traveling to Haj. And it is estimated that every year nearly 15,000 Muslims went to Hajj with Hindu people’s money. Not only that, Babur and Shah Jahan killed lakhs of Rajput in the name of expanding territories! Shah Jahan, who spent 50 lakhs on his wife’s Mumtaz jewels and luxury, barely spent 1 lakh rupees when 74 lakh Hindus were facing severe drought and famine. This killed lakhs of Hindus from hunger. Babur the great looted Indian temples and distributed them amongst his royal members and Muslim people!! Even India’s GDP fell down from 28.9% to 24% during the Mughal reign. So, what are you waiting for? Stay tuned to know how Mughals looted India and made the lives of common people like hell, in our today’s video.