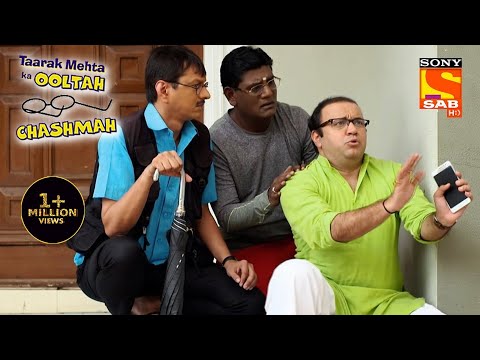 Bhide asks Tapu to look into Champaklal’s eyes and answer the questions he asks. Tppu manages to hide the fact that he crashed Sakharam. Bhide is now convinced that Sakharam has been stolen. Thus, Jethalal, Sodhi, and Popatlal head toward the police station to file a complaint. Now, Jethalal is in a dilemma, whether to tell Popatlal the truth who tagged along with them to report the missing of Sakharam.

About Taarak Mehta Ka Ooltah Chashmah:
———————————————————————-
The show is inspired by the famous humorous column ‘Duniya Ne Undha Chasma’ written by the eminent Gujarati writer Mr. Tarak Mehta. This story evolves around happenings in "Gokuldham Co-operative Society" and covers topical issues that are socially relevant. The show predominantly – revolves around ‘Jethalaal’ (Dilip Joshi), an uneducated Gujarati businessman. Your ‘Taarak Mehta’ (Sailesh Lodha), is his neighbor. ‘Jethalaal’ finds a friend and philosopher in ‘Taarak Mehta’ and often goes to him for advice whenever he is in trouble. Jethalaal’s family includes his simpleton wife ‘Daya Ben’ (Disha Wakani) and a mischievous son ‘Tapu’ (Bhavya Gandhi). Tapu is a menace and a constant source of trouble for all the members of Gokuldham. They have often warned ‘Jethalaal’ to reform ‘Tapu’ or else be prepared to leave the premises. Lost hopes of being heard by his son, he calls his father ‘Champaklal’ (Amit Bhatt) from the village. This was his great idea of leashing some control over the mischievous Tapu. The opposite happens and the grandfather joins hands with the grandson to make life a roller coaster troublesome ride for Jethalaal.