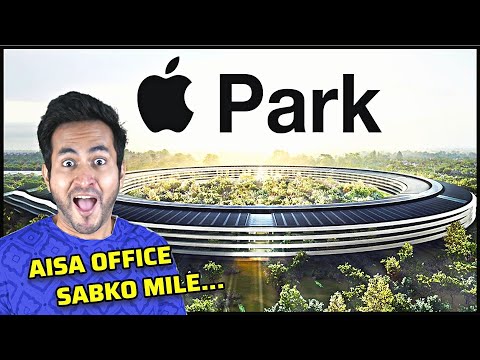 Hello friends, what looks like a giant spaceship parked in the land of Cupertino, California, is actually tech giant Apple’s new Headquarter. Fittingly named the Apple Park, this stunning architecture sprawls across 176 acres of land and might just be one of the most stunning campuses in the world! Although despite its incredibly futuristic looks, this apple park too making years to build, with Steve Jobs first announcing the project way back in 2006. It took 8 long years of planning, proposals, and permit applications, but by 2014 construction was well underway – and by 2017, the vast apple workforce was already starting to move in. And mind you, this cost Apple over 500 crore rupees! Can you believe it? That makes it one of the most expensive buildings on earth. And many people have wondered what exactly Apple got for their money. So in this video, we’re going to take a look inside Apple Park and discover the buildings and facilities that make the headquarters so special. So what are you waiting for? Stay tuned throughout the video.