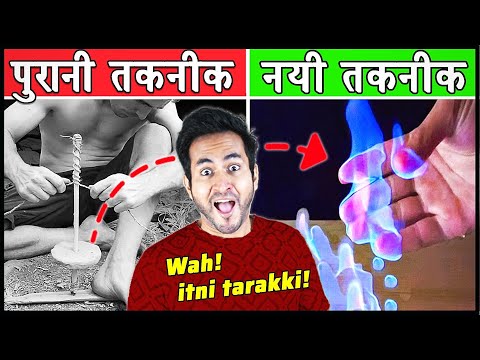 Hello friends, in the year 1991, archaeologists found a 3300-year-old mummy Oetzi on the Italy-Austria border. But you know, what was the most striking feature of that mummy? It was his sandals, that were made of from dear and bearskin!! And according to scientists, these sandals were invented out of need, during the ice age, where ancient people needed warmth to protect themselves! That was primitive techniques. But in today’s modern-day technology about a hundred sandals can be made in just 1 hour by using advanced technology and machines. In fact, did you know, the wheels that we use for transportation in vehicles, were originally not made for transportation but for pottery base? Shocking, right? And today it just takes a second to light a fire, but back in old age, it used to take about 15 hours, just to lit a fire! In fact, you know before the invention of pottery, stone-age men used to make vessels out of plain mud and give them shape by their own hands! And ever wondered how in old age, people made clothes? And from where did they get the cloth materials? Well, stay tuned throughout the video to know more about primitive techniques vs modern technology!