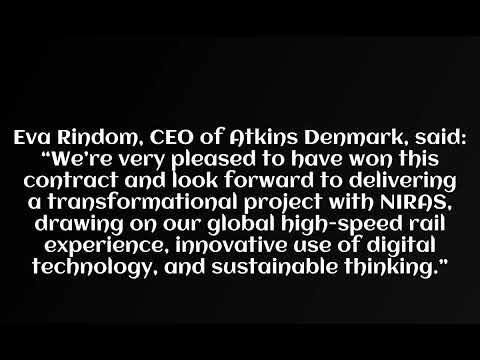 Atkins Danmark – a member of the SNC-Lavalin Group – has been appointed by The Danish Road Directorate as lead consultant for the Vestfyn Line, a new $430 m high-speed railway on the island of Funen.

The 35 km, 250 km/h double-track line between Odense and Middelfart will reduce travel times across Denmark’s principle east-west corridor and free up capacity on existing non-high-speed lines.

Atkins will work alongside Danish engineering consultancy NIRAS to design the railway – as well as intersecting roads, including approximately 3.4 km of motorway – in partnership with The Danish Road Directorate and Banedanmark, the company responsible for maintenance and traffic control across Denmark’s railway network.

Eva Rindom, CEO of Atkins Denmark, said: “We’re very pleased to have won this contract and look forward to delivering a transformational project with NIRAS, drawing on our global high-speed rail experience, innovative use of digital technology, and sustainable thinking.”

The Vestfyn Line is expected to be commissioned by the end of 2028 and adds to Atkins’ high-speed rail portfolio which includes Denmark’s Copenhagen to Ringsted Line; Sweden’s first high-speed mainline; Indonesia’s Jakarta – Bandung high-speed railway; and High Speed 1 and 2 in the UK.

Construction of a new approximately 35 km long double-track and electrified railway to 250 km/h across West Funen between Odense West and Middelfart
Interim highway where the new lane crosses the existing highway and road project for the intersecting roads and paths for the rail project
Construction of two flyovers: one at Middelfart and one at Odense