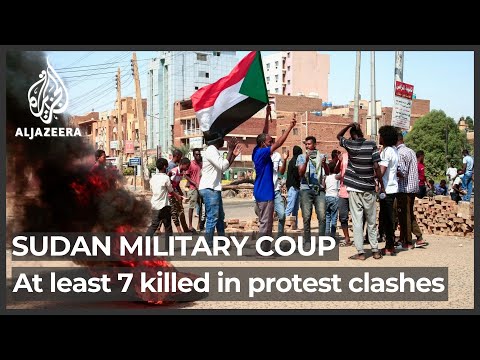 Defiant anti-coup protesters have barricaded roads in Sudan’s capital, Khartoum, returning to the streets for a second consecutive day despite the security forces’ use of violence the day before.
Sources at the Health Ministry told Al Jazeera that seven people were killed on Monday. The military also cut off access to the internet and closed some roads, bridges and the airport in Khartoum.
In a televised news conference, al-Burhan said Hamdok is safe at his own house as “we feared for his own life”.
During the speech, the army general said that by the end of the week justice bodies and the legislative council will be formed. The latter will be composed of young people not affiliated with any party. He also said that internet and mobile networks will be restored in the coming hours.