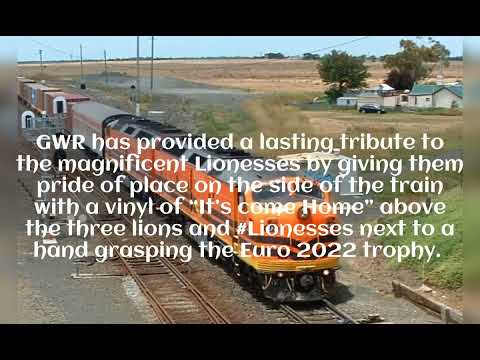 Great Western Railway (GWR) has been quick off the mark in celebrating the England Women’s football success in last night’s Euro 2022 final by adorning Intercity Express Train 800316 with a celebration design.

GWR has provided a lasting tribute to the magnificent Lionesses by giving them pride of place on the side of the train with a vinyl of “It’s come Home” above the three lions and #Lionesses next to a hand grasping the Euro 2022 trophy.

Football came home last night with England’s glorious 2-1 extra-time win over Germany at Wembley. Ella Toone had come off the bench to put England in front just after the hour, only for Germany’s Lina Magull to equalise and send the game into extra-time. However, substitute Chloe Kelly scored a dramatic 110th-minute winner to spark delirious scenes among a record European Championship crowd of 87,192.

Disruption to trams in the city Saturday 13 August